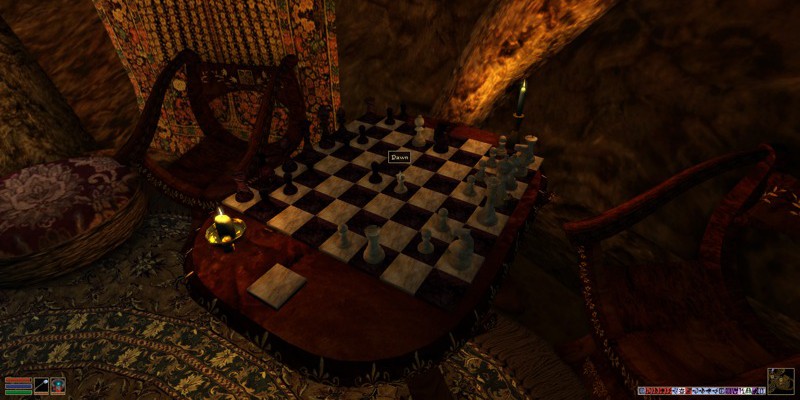 Requirements: Does not require ChessV3, since I included all necessary components.

Adds a functional chess board to the Tel Uvirith upper tower. As with Soralis’ Chess, you can choose to play against the AI or against yourself.

This add-on is compatible with all versions of Soralis’ Chess. I re-textured the original meshes to better suit Telvanni decor. These are separate resources with unique IDs, so they will not overwrite other installed Chess versions.

All of the pieces within the game move using the rules of Chess. The only exception to this is that since there’s no checking for Checkmate, pieces are not prevented from moving into positions which would place their own king into check, and victory occurs when the king is actually captured. There is a check made to see if the kings are in Check, and on a player’s turn, it will only display if that player’s king is in check, not if the enemy king is in check.

Please feel free to open the CS and reposition the chess board to somewhere you like better.

It’s an activator with the ID “Chessboard_uvi”. If you decide to position it in another room, you will also need to move two lights with the ID “ChessWinBlack_uv” and “ChessWinWhite_uv”. This must be done in the CS. You cannot move the chessboard in-game.

If you rotate the chessboard along more then one axis, it may not end up being at the same angle in-game as it is in the editor. This is because the editor uses a relative coordinate system, whereas the game uses an absolute one, such as if you rotate an object on the Z axis in the editor, it always rotates the object around it’s top, whereas in the game, it’ll rotate it around a vertical axis in the game. This doesn’t change unless you try to manipulate it, so in order to have it face the same direction as the rest of the chessboard, I adjusted it through simply “Rotate, z, 0”

When you save/load in the same cell where the Chessboard is, the victory condition lights will fail to come on. This can be fixed by leaving the cell and saving/loading and then re-entering the cell. This wasn’t a problem when I initially went with PlaceAtPC’ed lights, but then that had the problem that the lights grew exponentially, doubling each time.

When you save/load, or enter the cell after doing so, you may see pieces or squares moving around, this is normal, and is a bit of programming to fix the problem of placed/moved things not getting saved in the right position, and the pieces are simply moving back to their positions before the save/load.

Due to potential CTDs associated with picking up the chessboard in Chess v.4, I decided to go with the stable, static v.3 chessboard.

Credits, Thanks and Usage