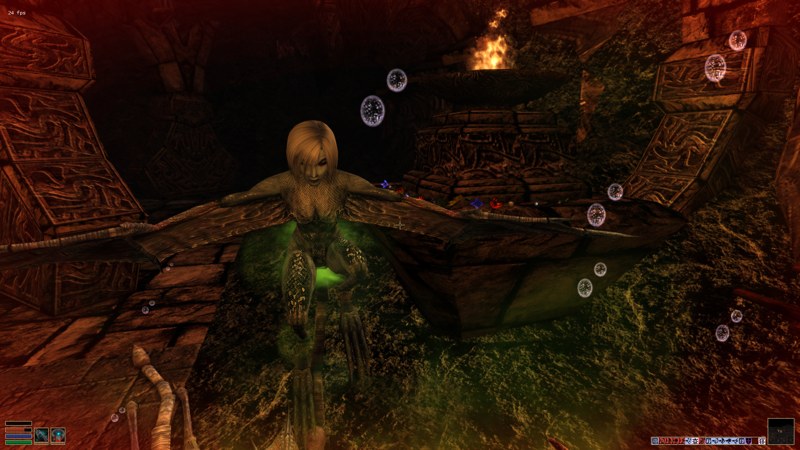 This mod is complimentary to LGNPC Tel Uvirith, Rise of House Telvanni, and Building up Uvirith’s Legacy. I’ve worked closely with their respective modders to ensure they merge seamlessly. It’s sometimes difficult to tell where one mod ends and the other begins. Using these mods together will guarantee you the richest possible Telvanni experience.

All these mods, for the most part, require you to join House Telvanni. Many options won’t be available until you become Archmagister, but there are some benefits to using this mod earlier, such as the Telvanni Teleportation Network, which any Telvanni can use after gaining a couple ranks.

Some Notes About Quests and Rewards

Most quests are written for a hard-lined Telvanni, so they’re skewed toward the amoral side. Don’t feel you need to pick the evil choices though; it’s entirely possible to play the whole mod as a neutral or good character. I’ve even offered good options such as freeing slaves for the Twin Lamps. The more evil quests (there’s only a couple) are merely designed as role-playing options, so there’s no need to complete everything in the mod. You can benefit from everything in the tower regardless of your character’s alignment.

I’ve tried to stay as lore-friendly as possible, though I often stretch lore to its limits while jackassing around. There are a lot of silly bits in the mod, but then Bethesda always includes random silly bits in their games, so it’s not off-base.

Most quests are non-linear, time-based, and integrated into other quests. They’re written for role-players, not power gamers, and I kept this in mind as I added quests, added functions to the tower, and created quest rewards. Characters involved will only tell you where to go and what to do to the best of their knowledge. Sometimes you have to wait for things to happen in the background; a missing a puzzle piece will fall into place as you do other things. Some quests can be started right away, but their continuation relies on completing (or at least getting to a certain logical point in) other prerequisite quests. Some quests won’t show up in your journal, or will show completion even though there may be more to them. In such cases, the quests are completely minor, optional, and rely on you stumbling on whatever you need to continue them. Sometimes I’ll trap you, and you’ll have to wait a moment for the next thing to happen (such situations are mostly done for comedy). I realize this may be frustrating to some. A full walkthrough is available here, and the still-very-much-alive Morrowind community is full of people who have completed runs through this mod.

In Uvirith’s Legacy version 3 I’ve added some hidden areas, oddities, and “incidents” you might trigger. These are meant to be easter-eggs of a sort, new discoveries to reward your curiosity, so they’ll remain undocumented.

Quest rewards are meant to be unique, interesting, collectible, and suitable for a high-level mage, but not too overpowered. I’ve tried to balance everything in this mod; I removed some uber-loot present in previous versions, and rebalanced the rest according to feedback from beta players. I’ve minimized rewards giving the player stat boosts or destructive power, which can be acquired by many other means. Sometimes rewards will be meager, or you’ll end up paying out more gold to complete a quest than you get in return. Such things are meant to be a money sink, such as your stronghold build, the value you get being non-monetary. Many rewards are scripted items that allow you to do things not ordinarily available in the game, which are covered in the special items section.

And no, this mod does not have “unlimited quests,” which is beyond the limitations of the game engine anyway (someone actually demanded this impossible request of me at one point). If you finish them all, you still have an awesome tower, which remains this mod’s main purpose. Neither does this mod contain any massive faction based political upheavals, since Rise of House Telvanni already covers that aspect.

This mod is designed for the Telvanni faction, so most content is not available to non-Telvanni. However, if you’re playing Redoran or Hlaalu, and just want to raid a cool tower, ok. I’ve added some features for you.

You can loot the Tel Uvirith Key from Raynel Uvirith. This will allow you access to some features previously unavailable, such as the tower elevator and secret lab. The tower centurions, dungeon hounds, and Llruvii the Hoarder will now attack any non-Telvanni on sight. The dungeon deep tunnels have been locked and trapped. Regular tower staff won’t be welcoming, but weaker servants won’t attack. No, sorry, they won’t accept you as their new master if you raid the tower and decide to make it your own. If you want that, make an add-on for it. I’ve also made sure no quests will start that can’t be completed by non-Telvanni.

There are a couple random quests in the world available to players of any faction. Most Books of Daedric Summoning can be found in the game world. However, a few are only available through quest dialogue, which is unavailable to non-Telvanni players.

Areas such as the throne room and vault are not accessible to non-Telvanni players. Since Reynel Uvirith is not the Archmagister, these areas will never be built. There are plenty areas to explore, and and loot for any Hlaalu or Redoran raider. But if you want it all, you’re just going to have to roll Telvanni.