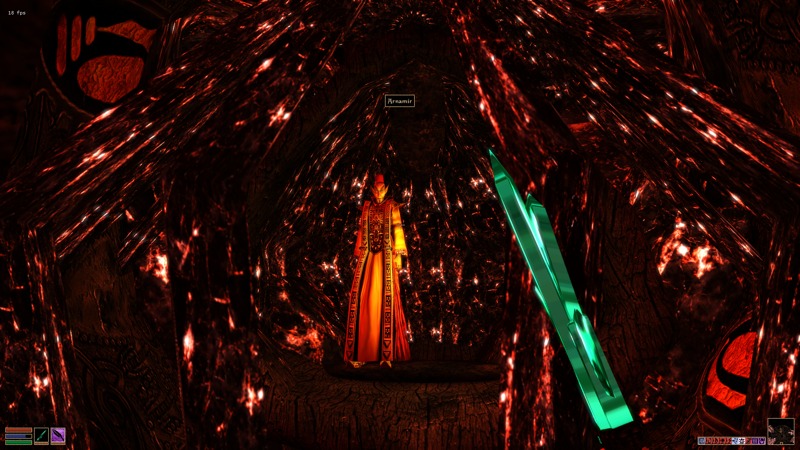 Rise of House Telvanni: is totally compatible whether or not you use the add-on.

LGNPC Tel Uvirith 1.20: totally compatible. However, both mods add a new Brown Book, so you may end up with two different versions. The Uvirith’s Legacy version has quest related information, so make sure you get the UL version from Fast Eddie.

Uvirith’s Legacy 3.0 adds some books from LGNPC Tel Uvirith to the library book-sorter, but not all due to Daggerfall book contents being removed for copyright reasons.

Uvirith’s Legacy is not only compatible, but also adds the Shock Centurion Manual (from either) to the library book-sorter and upgrades its cover.

Antares’ BigMod 7.3: Uvirith’s Legacy is so compatible you can use it to give your apprentice more chores (this used to be an issue in UL 2.0).

Necessities of Morrowind 3.0: Compatible and includes several NoM resources. In Uvirith’s Legacy 3.0 and higher, the main bed in the Upper Tower will make you fully rested, but doesn’t have schedule reconfiguring options. NoM must be loaded after UL.

The Bathing Mod 2.0: I’ve added Stinkers resources to the bathrooms in Tel Uvirith, the vault, and Zhariphel. Make sure the Bathing Mod Compatibility Plugin is loaded after Uvirith’s Legacy.

The Bathing Mod 3.0: Compatibility for this version requires a separate add-on.

The Lighting Mod: Requires an add-on to be fully compatible. It’s not required, but cells added by Uvirith’s Legacy may be too bright without it.

Illuminated Order/Lichcraft: are now compatible in Uvirith’s Legacy 3.0. You can now turn Gavyn into a vampire as a lich (formerly incompatible) and undead characters can better relate to you.

Books of Vvardenfell: BoV 2.0 and higher includes the book Bloatspore Cultivation, but it will be disabled until the Zhariphel Mine quest is completed. All books are included in the library book-sorter. Uvirith’s Legacy should be loaded after Books of Vvardenfell.

The Tea Mod: Must be loaded after Uvirith’s Legacy. Also, if you’re using Necessities of Morrowind, the load order is: UL; NoM; TM; TM NoM Patch.

Tamriel Rebuilt: The add-on included connects Tel Uvirith to the mainland and more, but it’s not required.